This week is National Infertility Awareness Week, and the theme for 2017 is Listen Up! If you want to find out more or get involved, check out the stories, social media images, and events on the website.

And the difficulty of finding the “right words” is one of the reasons that I really appreciate this year’s Infertility Awareness theme, because really the best advice really comes down to one word: listen.

But even though this advice is simple, it’s far from easy. And because one word doesn’t really cut it (or at least doesn’t make for much of an article), there are many people around who are telling us what NOT to say and what NOT to do. This advice absolutely has its place in raising awareness around many issues, and it can be very helpful. But it can also make interactions feel a little like a conversational minefield, where even though you’re trying your best you never know when you might accidentally offend.

If you’re supporting someone with infertility, the last thing you both need is to be second-guessing everything you say. So I thought I might share some of the things that have been helpful me to hear or read over the years.

Firstly, I want to reiterate that one-word advice, with a little addendum. Because, seriously, listening is the number one most important thing you can do. But for this to work, you need to also care about what you’re hearing and you need to listen to understand (it’s amazing how often we all listen to respond or to give advice or to correct or to judge – and I’m definitely including myself in that “we” too, this stuff is not easy!)

Secondly, I want to add two of my favourite articles. This first piece is about holding space. It focuses on the work of a wonderful palliative care nurse, but the advice holds up for so many areas, including the grief that can come with infertility. The second one is infertility-specific, and is a letter to family and friends of someone struggling with infertility. Not everyone will share the exact experiences of the author, but a lot of the feelings and advice she shares were very true for me and many others I’ve known in the same situation.

And finally, I wanted to give some credit to the amazing people who have supported me over the years by sharing some of the words and actions that have really stuck with me and eased the hurt of this hard situation.

And if all else fails, you really can’t go wrong with an Emily McDowell Empathy Card. (All images in this post are from her site). They’re pretty much great enough that I could have replaced this whole post with a link to her site. But that wouldn’t be much of a blog now, would it?

This week is National Infertility Awareness Week, and the theme for 2017 is Listen Up! If you want to find out more or get involved, check out the stories, social media images, and events on the website.

Last time I wrote something for National Infertility Awareness Week, it was 2014. I was six months pregnant, equal parts excited and freaked out, and I very much felt like our whole messy infertility journey was behind us.

And the thing is, I could have learned this earlier, if only I’d been willing to listen up. 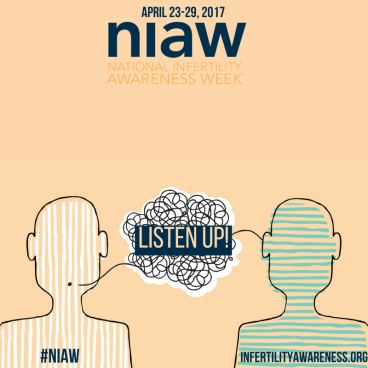 I was in infertility groups with people parenting after infertility or suffering from secondary infertility. And despite everything they told me, despite me hearing their stories, despite seeing their sadness, my attitude was pretty much “Oh, piss off – I would give absolutely anything to be in your position. And you have the audacity to COMPLAIN about it?”

I understand why I couldn’t listen at that point. I was in the trenches, I was deeply sad, I was unable to see past my own grief.

But I was still wrong.  These people were struggling, and they deserved to have a place and a voice in the infertility community. They did not deserve to have their stories and experiences dismissed and ignored because of my perceived position in the “Pain Olympics”.  I can’t go back and change anything, but I can now add my voice to theirs (while also maintaining a whole lot of empathy for those who are unable to listen to me because of their own experiences).

So, if you’re in a place to listen to some stories and thoughts around parenting after infertility and secondary infertility, here goes. (If you’re not in that place, or you’re not comfortable reading or thinking about periods, this may be the time to bow out.)

Once we were past the intense early days, I got more comfortable with not always feeling grateful. But then my hormones had a major change (or something), and every month for 8 months straight, I thought “either my period is coming back or I’m pregnant”. The answer was actually c) neither of the above, and going through that mindfuck month after month was the last thing I needed while also parenting a very active toddler.

Eventually my period did come back. And it even gave some indication of being somewhat regular. I thought that I was lucky enough to be one of the people with PCOS for whom a pregnancy “resets” some hormonal balance. I started tracking my cycles, and I was hopeful every month that I might be pregnant. But any semblance of regularity was short lived, and my lack of period was unfortunately not because of pregnancy.

And the questions stung too. “When are you going to get on with it and give her a sibling?” was just as hard to hear as “when are you planning to have kids?”, and a lot more people were willing to ask it.

The first time around, I had time and energy for self-care. I could avoid kids entirely. I got enough sleep. The second time, not so much.

But at the same time, I had a distraction. A busy, cute, amazing distraction, who I am truly truly grateful for. I didn’t have so much time to wallow, especially when we decided to take on a huge move and a major lifestyle shift. I had a whole lot of practice in how to deal with hard stuff that I didn’t have at first.

And, probably most importantly, this time around I’m just more comfortable with leaving it unresolved. The difference between 0 kids and 1 kid is bigger than the difference between 1 and 2 (or more). Or it seems that way to me, at least. And that smaller difference means that I don’t feel so much like I need to KNOW RIGHT NOW what my life will be like. I can accept where we are a bit more without endlessly trying to change it.

But I do know that as I try to make peace with the way things are (for now), I’m going to make the effort to speak out a little bit more. Because stories matter, and vulnerability is powerful. And as I speak out a little more, I’m going to listen up a lot more. Because ALL stories matter, and I don’t want to lose sight of that.

Sometimes I cook lots of vegetables and meals from scratch and new and interesting recipes and homemade bread.

Sometimes I make clothes and hats and art and cool projects.

Sometimes all our clothes are neatly folded and put away as soon as they’re washed and our laundry hamper is empty and our house doesn’t have any random piles of clothes and sheets floating around in various states of doneness waiting for the next step.

Sometimes I read wise books and clever articles and smart thinkers. And sometimes I even have smart thoughts and interesting conversations about them.

Sometimes our house is tidy and everything is put away and there are no toys strewn around the lounge.

Sometimes I stretch and practice yoga and do strength training exercises and take long walks.

Sometimes the dishes are all away and the benches are clean and shiny and the compost bin is emptied and the floor is mopped.

Sometimes I write, here or in my journal or on the mostly-abandoned novel that I still want to write. And sometimes what I write is actually good.

Sometimes our vegetable garden is weeded and tidy and the crops are harvested and used in our healthy dinners or blanched and frozen for later use.

Sometimes I write letters and organise thoughtful gifts well in advance of when they’re needed.

Gratuitous picture of the sunrise from my sister’s deck.

But sometimes surviving a 12 hour work day (including stupid mistakes and interviewing two job candidates and ringing seemingly endless tour operators to arrange tours that then get cancelled) without shouting at anyone is enough.

Sometimes getting my kid to daycare with a packed lunch and picking her up on time is enough.

Sometimes a packet of soup for lunch and macaroni cheese for dinner is enough.

Sometimes it’s hard to remember that these things are enough.

Sometimes it’s hard to remember that I am enough.

And so are you.

And sometimes we all need a little reminder of that.