“Why would someone move back from making big bucks overseas to live here and work more and make less?” I’ve been asked this question once, and kinda-nearly-but-not-outright asked this question several more times. And the answer is basically: we love New Zealand. But from the way it was asked, that wasn’t quite what they meant. To get more specific, yes, this change involved a pretty decent drop in income. But even if we just focus on money (which ignores the multitude of reasons we made this choice) it’s not really that simple. Our overall household income is less, even with both of us working now, we pay more tax than we did in Brunei, and we work many more hours for less pay. At the same time, we pay less in household bills (rent, power, phone etc.), we still don’t have to pay much in the way of childcare, and we have less free time to spend money.

But the biggest reason that the income drop hasn’t been so bad is that it’s so much easier to be frugal in New Zealand (for us, anyway). We’ve definitely had an adjustment period as we get back into the rhythm of frugality, and there are still plenty of things I’d like to change, but our lifestyle here lets us do several things that help us save money compared to our lifestyle in Brunei:

Bonus points: our uniform is awesome.

Coming home and making this change was NEVER about the money. At the same time, we didn’t want to be constantly scrimping and saving and worrying about money. Before we moved, I did worry that this would be the case. But, so far, it’s not at all. I think if we’d gone from similar job/lifestyle to similar job/lifestyle and had this same pay cut, it would have been quite a shock (we would still have done it, but it would have been hard). But because we changed EVERYTHING, the change in budget has been pretty low on the list of changes. By living a little more frugally, saving in some important areas (RENT), and staying at home more often, it just hasn’t been a big deal. PHEW. 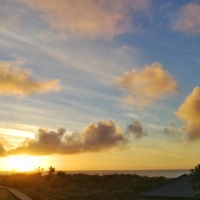