When I travel, I love to try the local cuisine. But I have to admit that I also have a soft spot for trying global fast food chains in different countries. I liked having fritessaus with my fries in the Netherlands, I tried a bulgogi burger in South Korea, we visited Subway and Domino’s in Japan. So when Burger King came to town, I was always going to give it a go. A Sunday evening after a disappointing afternoon of cricket viewing was the perfect time to pick up some burgers and the dessert menu gave us the opportunity for a challenge: the Taro Turnover.

After an underwhelming Whopper, and some really good fries, we broke into the turnover. The filling was not hot, as promised on the box, but was purple, as expected (although it doesn’t look it in the picture).

There was nothing left but to try it.  The Engineer went first, and pronounced it too sweet. He has much more of a sweet tooth than me, so my hopes weren’t high.

So when I tried it, I was pleasantly surprised. It was sweet, but the pastry was like a classic fast food pie (i.e. fatty and delicious), and the filling was vanilla-y or pandan-y or something that made it quite appealing. It wasn’t strongly flavoured, and I liked it. 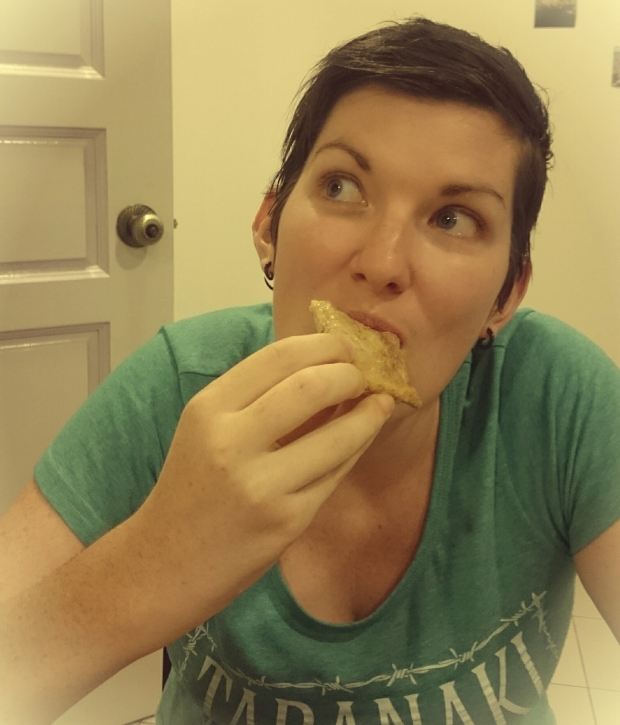 In fact, I made this the only challenge so far in which the challenge item was finished. No food wastage today!
Except for the very small piece that we offered to The Engineer’s Baby. She seemed to side with her Papa, and was not too impressed.

It was her first “Weekly” Challenge, and I for one think she did a stellar job with her facials. Which is, after all, pretty much the point.
I might be on my own here, but I’m giving the Taro Turnover a big thumbs up. And best of all, next time I won’t have to share it (if there is a next time that is – the burgers weren’t really nice enough to go back for…)