I am truly in catch up mode on this blog at the moment, and I want to capture all the holidays we had over the Brunei “summer” (most people here are from the Northern Hemisphere, so the big holiday for the schools is in the northern summer.  The season is not really any different to any other year, and July/August will never seem like summer time to me, but that’s what I’m going to call it anyway).  I talked already about my trip to India with my sister.  And I’ve previously mentioned that just a couple of days after returning from that, we flew out to the Philippines with a group The Engineer knew through work.    But now I want to talk a bit more about that long weekend in early August.

We had a holiday because it was the end of Ramadan.  And what I really mean by that is The Engineer had a holiday (because, to be honest, I have a constant holiday).  So we decided to tag along with this group on a trip.  We wouldn’t necessarily have picked the Philippines, and we definitely wouldn’t have known where to go within the Philippines, so it seemed like a great opportunity to try something new.  And as soon as we did a google image search of Palawan, we were sold.  Because it was a group trip, with a group we didn’t know all that well, we weren’t too involved in the planning.  We probably wouldn’t have chosen to include quite so many flights in our four day trip, but we were happy to roll with it and just take things as they came.

Unfortunately, just a couple of days before we left, I came down with a nasty cold.  I spent a couple of days stocking up on vitamin C and resting to try and get it out of the way.  But when it came time to leave, it was still sticking around.  And the fact that we left from Brunei at 2:30 am, landed in Manila at 4:30am, and flew out of Manila to Puerto Princesa at 8:00am, arriving around 9:30am, did not help matters.  By the time we landed, I was exhausted, and had practically lost my voice. I was actually quite grateful that it was a 2 hour drive to our accommodation, because I needed a rest!  The roads only allowed me to sleep for about half the time (bumpy bumpy), but I was okay.

The beach outside Daluyon Resort

Our first night was outside Puerto Princesa town, in a lovely resort.  We visited the Underground River (which was beautiful, but not quite as impressive as it sounded in the guide book).  And other than that, I pretty much spent the whole time sleeping and drinking fresh juice.  My cold was peaking, and I just could not handle being around people I didn’t know.  The Engineer did some ziplining and exploring with the rest of the crew while I read lots and lots of books and rested my little heart out.

Ready to head into the Underground River. You can probably tell that I am sick as a dog.

Beautiful view outside the Underground River

The next night we were in Puerto Princesa proper.  We did some souvenir shopping, some mall shopping, walked along the waterfront and ate some wonderful seafood at Kalui (seriously, if you’re ever in Puerto Princesa, you have to go there.  Unless you’re vegetarian or don’t like fish, then it probably wouldn’t be much fun).  The Engineer and I had in-room massages, which were amazing value at around $10/hour, but were kinda awkward.  Because were were, you know, in our room…

The waterfront in Puerto Princesa

But the real highlight of the trip was when we headed out to Coron (another flight, but one that was well worth it, even though my ears were still blocked and the pressure changes were not at all fun).  And while there we did what everyone goes to Coron to do, we explored the amazingly clear and beautiful waters.  We did it by snorkel, as we are not (yet) licensed to dive, but some some people from our group did diving, and said it was amazing. 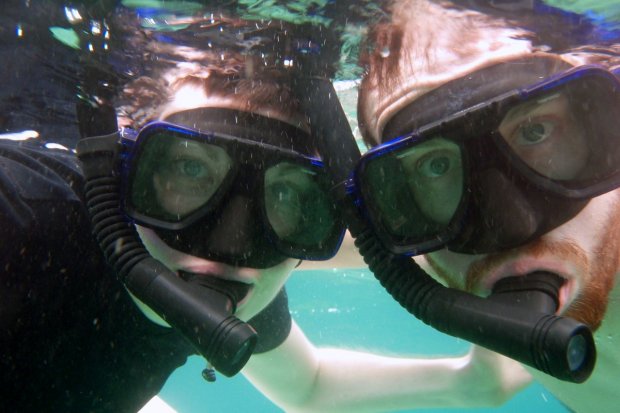 Our snorkelling was an organised tour.  Tours are not usually my style, but there didn’t seem to be any other way to get there really, and it was cheap, and amazing.  They took us to five different sites.  Three were for beautiful coral reefs and fish, one was for a truly beautiful lake with caves and rock formations, and one was for beach relaxing.  The beach one got a little washed out by the rain (as did most of our evenings in Coron), but the rest of them were filled with warm clear water, and so much to explore.  The Engineer and I were the only ones from our group who went out without lifejackets on (weird, right?), so we strayed far from the group and he taught me how to dive under with a snorkel on (and not breathe in any water). I had great fun diving down and seeing more of the bright corals and fish.  When we finished the day we were exhausted from all the swimming,  excited by what we saw, and convinced that we had to get SCUBA certified. We were also speaking with way too many superlatives and too much frilly language.  Because, to be honest, we just couldn’t figure out a way to explain it.  I still can’t.

A school of fish

The rest of the time in Coron we spent wandering around the town.  We visited the thermal baths, had some delicious seafood meals, tried halo halo, had more massages, and just generally got to know the group we were with.  It was a little bit tricky, because we were the only ones who didn’t speak Mandarin, but they were a great group, and we had fun.  It helped that my cold had pretty much disappeared by the time we reached Coron. 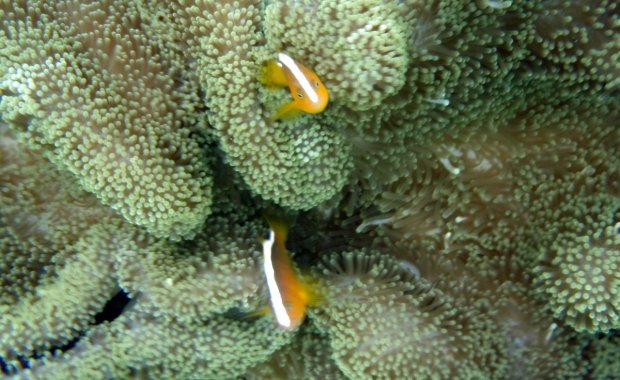 Fish and coral. Our underwater camera does not do a great job at capturing the awesomeness.

And basically no sooner had we got there, we had to leave again.  That is the unfortunate nature of a long weekend holiday.  But Palawan was a great place to spend the long weekend.  And our trip was a great taster for somewhere to which we plan to return.

One thought on “A long weekend in Palawan”