When you’re in a new country, it’s easy to try new things.  They’re everywhere.  From Bandung at the riverside food stall, to  Teh Tarik at most places, we can’t really avoid the new stuff.  Even Nasi Lemak, Nasi Ayam, and Mee Goreng (some of our staples here), are not things we ate regularly at home.  But at the same time, it’s also very easy to grab onto a few staples, and stick to them.  It can be scary to order new things at restaurants; sometimes the ordering starts a whole stream of questions you don’t know the answers to or understand.  And some things just sound weird, or you don’t know what they are, so it’s often easier to avoid them.

But we don’t want to be the kind of expats who don’t try anything new.  We want to get out there and eat weird stuff, do new things, and basically just give things a go.  And in order to make sure we do that, we’re setting some challenges.  The idea is that each week there is a challenge.  A challenge for The Engineer; a challenge for me; a challenge for both of us; rinse and repeat.  I had the first idea, which is why The Engineer was lucky enough to go first!

And what was that idea?  It was something I found at the awesome Lof bakery in town (turns out the savoury things aren’t exactly delicious, but the shop is well set out, air conditioned, cheap, and the $1 donuts come in all sorts of flavours).  And when I saw it, I just knew this was to be the first challenge.

Yes, the label on the picture is correct. It’s a Sardine Donut.
Photo by me.

It looks innocent enough.  But the label is correct.  This is no ordinary donut.  It’s a SARDINE Donut. And The Engineer’s challenge was simple: to try it! 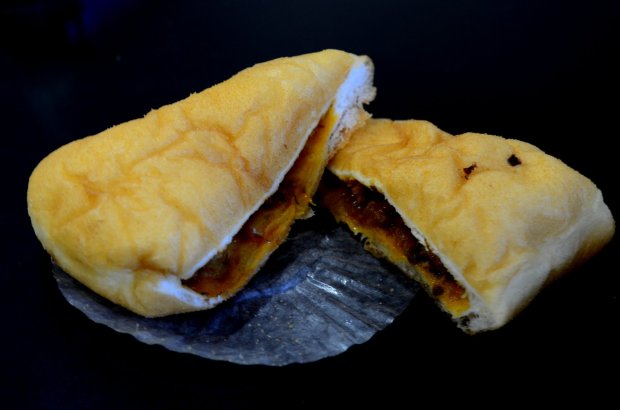 Inside view of the Sardine Donut.
Photo by me.

He took a few tentative bites, and came to the conclusion that the donut was more weird than bad.  I, of course, had to try it as well (I know it was his challenge, but this is probably the only time we’ll have one); and I agreed that it was kinda odd, but not entirely offensive.  It tasted like a donut, filled with tomatoey sardines (who knew?).  We didn’t finish it, but we didn’t spit it out.  And had we known what was ahead of us (weirdly sweet filled rolls), we might have looked upon it more positively.

The Engineer’s reaction to the Sardine Donut.
Photos by me.

Overall, the first weekly challenge was a success.  We tried something new, and realised that it wasn’t for us.  But more importantly, we got into the whole challenge idea, and have since been come up with all sorts of other plans (you’ll have to wait to find out what those are though!).  It was something we probably wouldn’t have done without a reason, and it didn’t make us throw up.  I’d call that a success!

Keep your eye out for more of these in the future…